Guan Yin, the Chinese name for Avalokitesvara Bodhisattva, is revered as the Bodhisattva of Compassion and the Goddess of Mercy. Daoists also revere her as an immortal. She is one of the highest saints and a very important spiritual mother to Master Sha and countless others. She has an important position and role as a spiritual leader in Heaven since pre-history. Her role is even greater in the Soul Light Era, the 15,000-year-long era that began on August 8, 2003.

Guan Shi Yin Pusa is "the boddhisattva who sees the world's sufferings and responds with the greatest compassion. When she was on Mother Earth, she learned Da Bei Zhou (Big Compassion Mantra) from her spiritual father, Qian Guang Jing Wang. She immediately vowed to chant and teach Da Bei Zhou forever . Her teacher was so moved and touched that he gave Guan Yin a gift of a thousand hands and a thousand spiritual eyes. 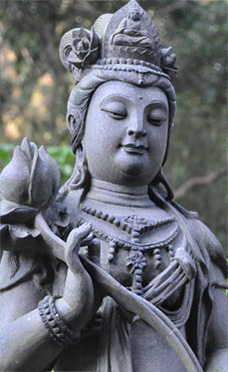 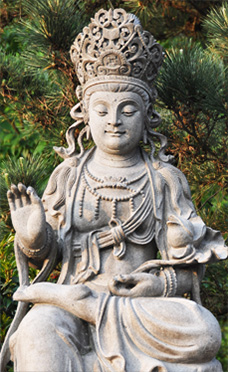